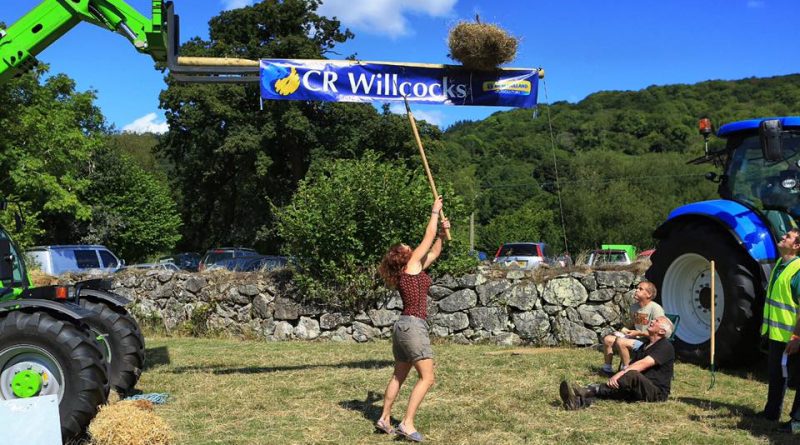 If the winner of the Under 16 category would contact the Show Secretary for attention Patrick, stating your age and some proof of attendance at the Show, the we will send you your prize. The email address for the Show Secretary can be found by going to the “About Us” page.

For those of you who don’t know what Sheaf Tossing is (it is not SHEEP Tossing which it is commonly mistaken for!!) it’s a sport that involves great skill, focus, strength and accuracy. The challenge is to TOSS a sheaf made of rushes, which are tightly bound together, sometimes weighted to increase the challenge.

A pitchfork is used to hurl a Sheaf over a horizontal bar above the competitors head. Three chances are given to each competitor to clearly go over the bar without touching it.

After the competitors have made three attempts, the bar is raised and all successful competitors move to a new height. This continues until all but one athlete is eliminated.

We have been running this event for over 25 years, and it is a firm favourite with our local, and not so local farmers.

So test your strength and skill on our sheaf toss.  This country show favourite has origins in the Highland Games, but kilts are strictly optional!

You can have a go throughout the day, with separate men’s, women’s and under 16’s competitions running, concluding in two thrilling finals in the afternoon.

The finals are a definite highlight of the day, and you’ll be cheered on by hundreds of showgoers!

We award prizes for the top male, top female and top under 16’s competitors.

2 thoughts on “Tossing the Sheaf”