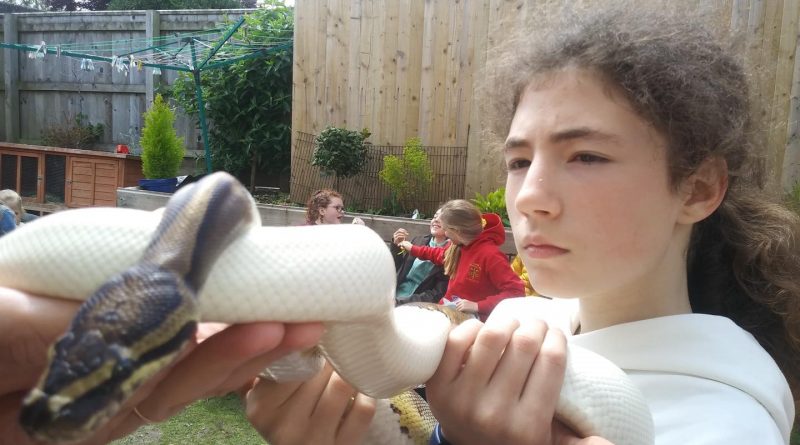 Come and meet a range of exotic creatures with Chris Johnson from South West Animal Services.   You could have a close enoucnter with a Royal Python, a giant millipede, a Corn Snake, a Fijian Iguana, a radiated tortoise, or if you’d like something a bit cuter, why not a Lesser Tenrec (which look like Hedgehogs).

Just look, or if you’re feeling brave, why not have a hold?

Some of the species I keep and breed are endangered in the wild, with only a few Zoos keeping them.  Others are very hard to breed in captivity, it is these species that I have always wanted to work with.  Unfortunately I can’t release the offspring I produce back into the wild, so instead I provide other trusted keepers with healthy animals that have been bred in captivity rather than being pulled from the wild.  By doing this I am supporting the fight against the trade of illegally caught wild animals.  A trade that subjects animals to inhumane conditions, where many die whilst being transported or fall seriously ill when they eventually arrive in someone’s home.  Unless they get the rehabilitation they deserve wild caught reptiles rarely do well in captivity!

Many of us have visited Zoos and read about some of these exotic animals on the information boards at the front of the enclosure.  I want to allow people to get up close to the animals I keep and get first-hand knowledge from someone who is passionate about animals and works with them every day.

At any event the welfare of the animals will be my top priority.

None of the animals i use pose any risk of serious injury.