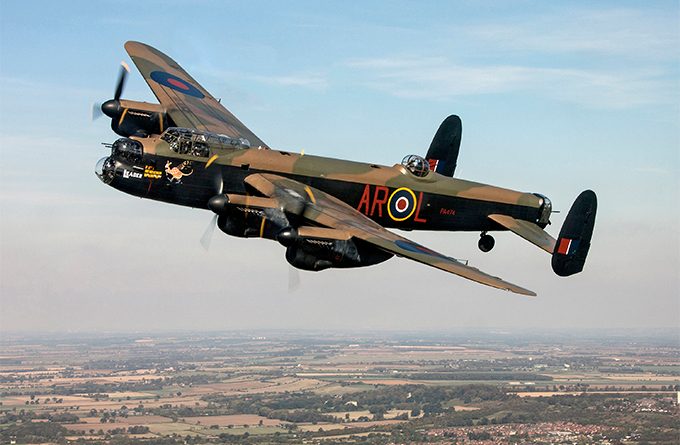 The RAF Air Events Team presents a Flypast event at the 2022 Lustleigh Show on 29th August 2022 with an Avro Lancaster WWII Heavy Bomber. This is your chance to see one of only two airworthy Lancasters left in the world.

The RAF have confirmed that the flypast will take place at 15:14 (+/-10 minutes) and subject to weather and operational changes. The advised flight path is approaching from the NW and exiting to the East. Look towards the main A382 over the Kelly Farm Buildings.

About the Avro Lancaster 1…

The Avro Lancaster is the most famous and successful RAF heavy bomber of World War Two.

There are only two airworthy Lancasters left in the world – 7,377 were built. (One is in the UK, the other in Canada)

For the last three years of World War Two the Avro Lancaster was the major heavy bomber used by Bomber Command to take the war to the heart-land of Nazi Germany.

It resulted from design work undertaken by Roy Chadwick and his Avro team to overcome the problems experienced with the twin-engined Manchester bomber. The prototype made its first flight in January 1941.

With an impressive performance and excellent flying characteristics it soon established its superiority over other allied four-engined bombers operating in Europe.

The industrial and military organisation needed to build and operate the Lancaster was huge. Six major companies built 7377 aircraft at ten factories on two continents; at the height of production over 1,100,000 men and women were employed working for over 920 companies. More service personnel were involved in flying and maintaining it than any other British aircraft in history.

The Lancaster’s operational career is littered with impressive statistics, some are set out below, but it is worth remembering that the average age of the seven-man crew was only 22 years. They endured danger and discomfort and many showed great courage in continuing to fly knowing the odds against survival were high. Bomber Command suffered the highest casualty rate of any branch of the British services in World War Two.

On average Lancasters completed twenty-one missions before being lost.

About the Battle of Britain Memorial Flight…

The Royal Air Force Battle of Britain Memorial Flight (BBMF) operates from RAF Coningsby, a Typhoon base in Lincolnshire.

The mission of the RAF BBMF is to maintain the priceless artefacts of or national heritage in airworthy condition in order to commemorate those who have fallen in the service of this country. The RAF BBMF also serves to promote the modern day Air Force and to inspire the future generations.

We are proud to have HRH Prince William, Duke of Cambridge as our Patron.

More about the BBMF…

If the winner of the Under 16 category would contact the Show Secretary for attention Patrick, stating your age and